It’s easy to assume that labour-intensive artisanal food operations do not benefit from automated solutions in the same way that a technology-heavy manufacturer do. But in fact, as Pump Street Chocolate demonstrates, automating the date coding process by installing a RF Lite feeding system with thermal inkjet (TIJ) coder makes a huge difference on production efficiency, freeing up skilled workers for core duties. 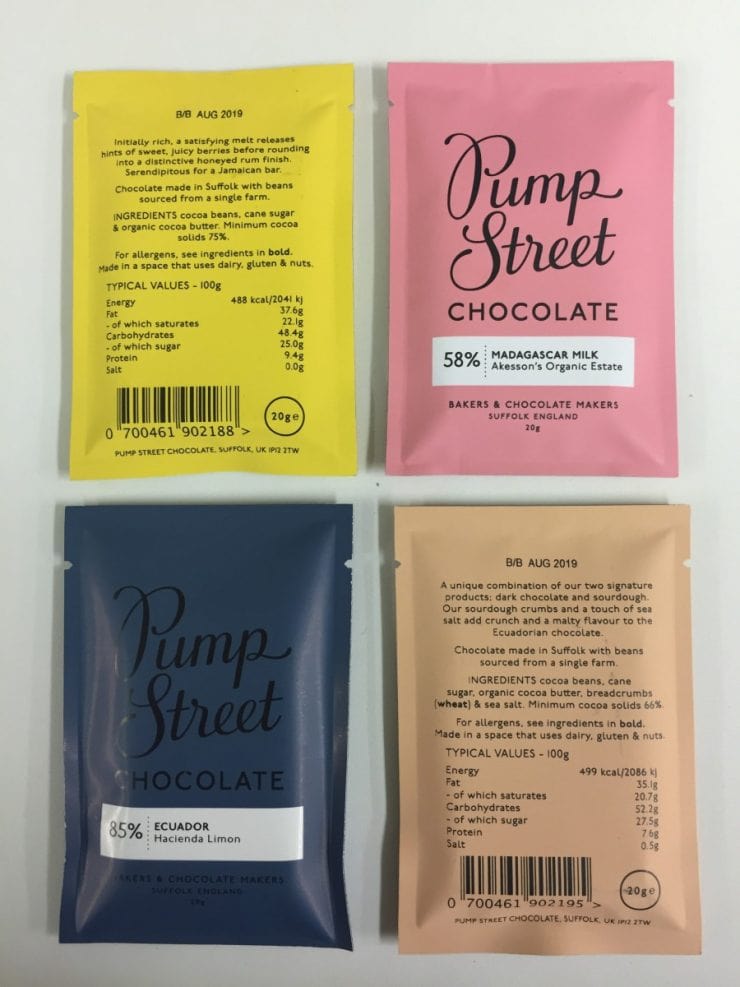 From bean to bar

While the team of six full-time workers in Pump Street’s chocolate room use a certain amount of machinery, it is very much a hands-on operation. As one of the few UK producers going all the way from ‘bean to bar’, it requires maximum workforce availability for a range of processes, from roasting, winnowing, grinding and conching to tempering. That is before the team even starts to mould and pack the chocolate.

So, when at the end of last year the Orford-based company began to produce smaller 20g bars to complement the existing range of 70g bars, it soon became clear that automated coding would be a necessity. The full-size bars use a resealable sachet printed in-house with a batch code and best-before date, which also acts as a tamper-evident seal. The smaller tear-open sachets for the 20g bars, typically destined for the coffee-shop and hotel market, required a different solution.

“We were literally writing the sell by date on to the sachet by hand,” says Customer Manager Sally Jones. “Every month we make batches of around 4,000 bars, and it was taking up hours of our time. Now, in 20 minutes or so, the Rotech machine prints what it would have taken us three days to write by hand.”

Rotech’s RF Lite is ideal for food producers looking to automate their date marking process for the first time. It takes individual packs from a hopper, positions them for coding, before transferring them to a stack of coded sachets. The feeding system has a linear speed of up to 60m per minute.

“The speed and the efficiency of the system were both important, as well as its ability to adapt to other products further down the line,” says Sally. The company is developing packs of couverture chocolate and chocolate powders for supply to the foodservice sector.

“From order to delivery and installation, it all happened very quickly,” she adds. “We were shown how to operate it, and it’s incredibly user-friendly. I can include additional information such as batch codes by making a simple change from my computer.”

TIJ coding is often overlooked in favour of other coding technologies such as thermal transfer or continuous inkjet (CIJ). Rotech highlights the lower cost of TIJ, when compared with CIJ on the basis of cost per 1,000 codes. As a general rule, says the company, CIJ can cost over one and a half times as much.

At Pump Street Chocolate, the iJet TIJ coder is programmed to print a best-before date 14 months from production. “Because the machine automatically updates itself, we tend to use it as our point of reference when it comes to date coding,” Sally says. 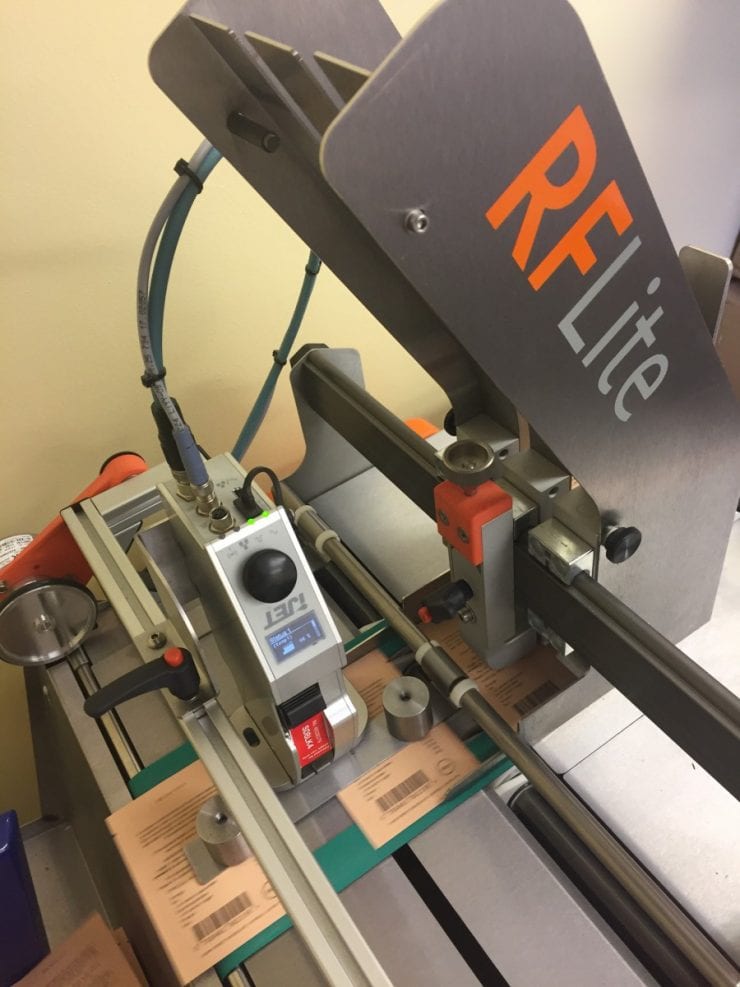 The chocolate business began as a spinoff from the Pump Street Bakery, which was founded in 2011. “The bakery very quickly gained recognition, but the products could only really be sold on the day, and only locally in Suffolk,” Sally explains. “The founder, Chris Brennan, started working on small-batch, hand-tempered chocolate, and really built this up around five years ago. Chocolate has a shelf-life. More and more farmers have been sending us their beans, to the point where we have a global export business.”

So far, the chocolate brand is stocked by around 200 UK retailers of all sizes. Higher-profile names include Fortnum & Mason, Liberty and Harrods in London.

When the chocolate room team had made it clear that some sort of automated coding system was needed, Chris set about sourcing the right equipment for the job. Once he had visited Rotech at a trade show and seen the combination of RF Lite and iJet in action, it was not long before he acquired a system of his own. 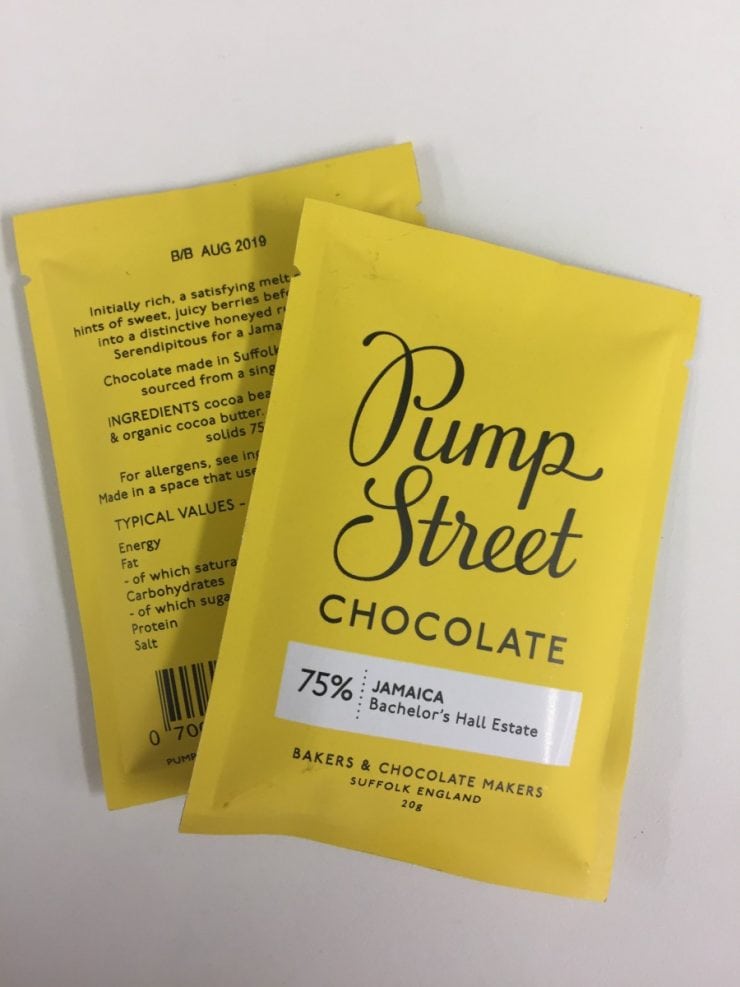 The example of Pump Street demonstrates other benefits of TIJ over alternative print technologies. It is an on-demand system, there is no cost or wastage when the coder is not in use. And because the entire printhead and ink supply system is replaced with each new cartridge, there are none of the maintenance requirements or mess associated with CIJ.

Meanwhile, the quality and versatility of TIJ ink systems is great, providing high adhesion even on high-gloss surfaces and a wide range of shades all the way to high-contrast black.