Offline coders are quietly handling the awkward jobs that would otherwise hold up production.

Packaging designs are often presented to production as a fait accompli. It is then up to equipment and factory engineers to figure out how to run that pack on a production line.

Coding is one aspect of the packaging workflow that is rarely taken into account when a pack is conceived – even though clear and correct batch codes, use by dates and traceability codes are essential when supplying the retail market.

Consequently, some packs are inherently awkward to code online – perhaps because the area to be coded is in a hard-to-reach corner of the pack or because handling issues make it difficult for the pack to be presented squarely and consistently to the coding device.

In both scenarios, offline coding offers an affordable and practical solution. By coding cartons, sleeves or pouches offline before they are filled, they can be brought to the production line ready printed. This has considerable advantages for code quality as coding the pack in its flat form results in a consistently clear, perfectly positioned code. Furthermore, where an online coder is

struggling and creating a bottleneck, removing the process from the critical path can deliver efficiency improvements.

Take, for example, cardboard sleeves, an increasingly popular format for everything from ready meals to sausages, yogurts and desserts. Sleeves can be problematic when coding online, as they have a tendency to slide out of position, which can result in codes being applied outside the target area. Added to this, when marketing departments decide where codes should be printed on sleeves, they will usually opt for a discrete position, without taking into account how practical this will be to apply.

This was the issue facing a UK prepared foods manufacturer when it contacted Rotech to enquire about an offline sleeve overprinting system. The manufacturer in question had just taken an order from one of the multiples for 3,000 units of a new product that was packaged in a tub with a cardboard sleeve. The manufacturer was applying date codes using an existing inline inkjet system, but because the code was positioned in a difficult-to-reach spot at the bottom of the sleeve, the line had to be slowed down by 30% to make sure the code was applied accurately.

Essentially the coding operation had become a bottleneck because the coder was having trouble printing at an angle just a few millimetres above the conveyor; it kept mis-firing and spraying the belt rather than the product. This was not only limiting line speed, but also resulting in packaging waste.

Rotech’s solution came in the form of its RF2, a standalone friction feed overprinting system that would enable the manufacturer to code the sleeves offline and bring them to the production line already printed. Engineered specifically for the food industry, the RF2 uses Rotech’s stack-to-stack feeding technology to pick sleeves from a stack, accurately print date or batch codes, and place the printed sleeve neatly onto another stack for collection, all at speeds of 400 per minute.

Pre-coding enabled the manufacturer to deactivate the inline coding system, restore line speed and code the 3,000 sleeves in a matter of minutes.

The design of the pack within the sleeve also determines how easy – or tricky – online coding will be. It is straightforward enough to apply best before dates and traceability codes to a four-pack of yogurts or a sleeve wrapped around a rectangular tray that is being transported past the coder via a conveyor with a good guide rail. However, with more awkwardly shaped packs, the chances of the feeding system presenting the pack and sleeve squarely to the coder can be slim. Conical sundae-style containers, for example, are inherently unstable and can easily topple over on a conveyor belt.

The rise of the doy style stand-up pouch for applications ranging from dishwasher tablets to snacks and soups has presented some serious challenges for the coding operation. Some of the more structured pouch designs are not so easy to produce on a form, fill, seal machine, so for small to medium volumes, producers are buying in pre-made pouches. The downside of this is that a thermal transfer printer cannot easily be employed to print on the formed pack. There is not always an opportunity to code the pouch online before it is filled and thermal transfer printers struggle to print on anything other than flat film.

Continuous Inkjet (CIJ) is therefore a more common technology for this application. But whilst CIJ is ideal for printing small amounts of information, such as use by dates, producers are increasingly looking to overprint large amounts of information. Overprinting information such as product names, nutritional information and ingredient lists allows them to limit their stock of pre-printed packaging film, as the same film can be used for different SKUs and geographical markets.

In this scenario, thermal transfer is really the only technology that is capable of wide format, on-demand printing of fine text.

To this end, Rotech has developed the RF1, a standalone vacuum feed overprinting system that has been engineered specifically for pouches, bags and other otherwise awkward to feed products. By using a thermal printer with a print width of up to 128mm and printing continuously, a very large print area of almost any length can be accommodated. 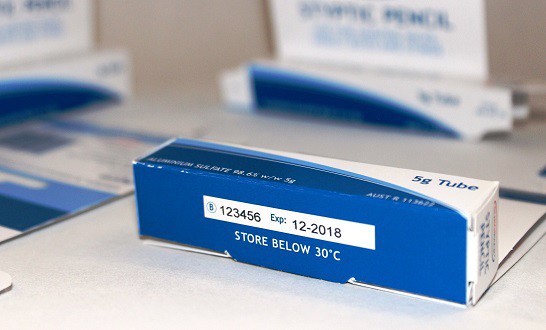 Some people automatically assume that offline coding is for smaller producers with largely manual operations. In fact, the hi-tech, high speed pharmaceutical industry is one of the biggest users of offline coders, particularly for coding crash-lock cartons and end flaps of cartons.

Pharmaceutical cartons are usually coded on the end flap. However, potential for mis-codes arises when the closed end flap bulges, presenting a convex surface to the printer. Offline coding has the benefit of being able to present the pack to the coding device in flat form with the print area readily accessible.

Crash-lock cartons, used widely by pharmaceutical manufacturers as secondary packaging, are another problem format for online coders. Applying a code to the top of a crash-lock carton may require special machinery parts to hold the flap still. Furthermore, it seldom makes sense to code crash-lock cartons online, as they are designed to be erected and closed by hand. Coding online in an otherwise manual operation involves adding automation in the form of a coder mounted on a dedicated conveyor belt just to apply the code. This set-up not only incurs expense but also makes accurate code placement tricky.

On the face of it, online coding may seem to be the logical way to mark a pack, but in reality, online doesn’t always equal better efficiency. If the design of the pack precludes reliable online coding, chances are that offline will prove more consistent, flexible and economical.