Rotech, the Hertfordshire designer of end-to-end coding and feeding systems, is using PPMA as the launch-pad for a new offline coder dedicated to pouches. A customer-driven development of the RF1-V, the new RF1-V+ offers a 50% improvement in speed through design innovations including a shingling infeed and extended reservoir capacity.

“The focus of our R&D is to increase throughput speeds ‎and drive down cost. The aim of this project was to significantly increase the speed at which difficult-to-feed pouches with reclosable zippers can be coded. It was all about achieving better efficiency and utilisation by engineering an offline coder that is capable of running continuously without any stopping and starting,” says Richard Pether, director at Rotech.

The stand-up pouch is one of the fastest growing flexible packaging formats for a wide variety of end-use applications, but is not always easy to code online, as Richard explains: 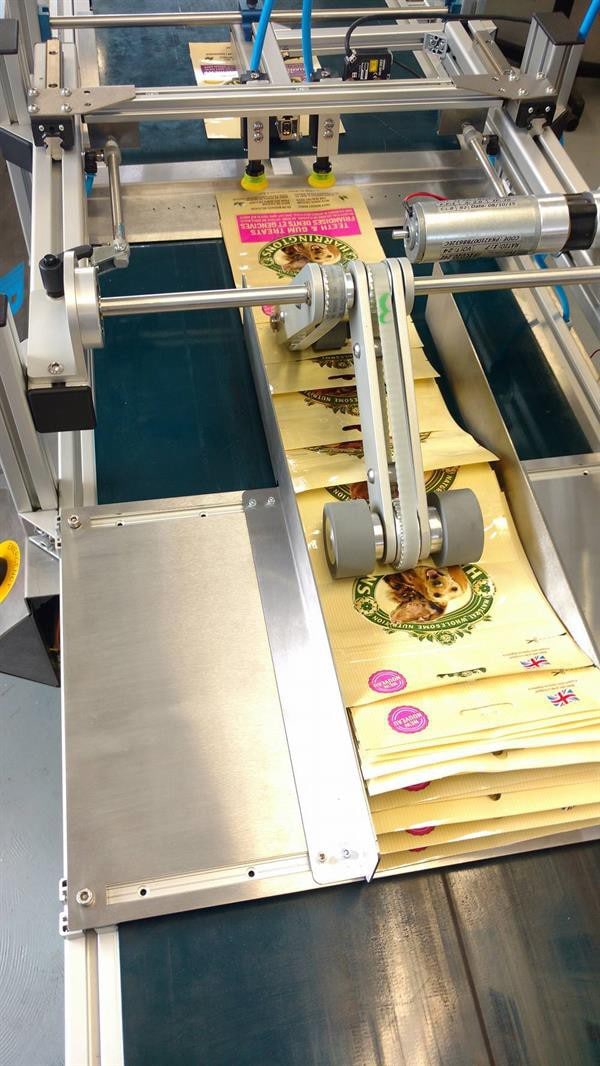 “Pouches that are formed, filled and sealed online are straightforward enough to code prior to filling, but when using pre-made pouches or trying to code onto filled packs, online coding becomes problematic. In these situations, an offline coding system is preferable from both an efficiency and a code quality perspective, as pouches can be printed offline before they are filled, and brought to the production line ready printed. Coding the pouch in its flat form results in a consistently clear, perfectly positioned code. This is why more and more companies are coming to us in search of offline pouch coding solutions.”

Most offline coders use friction feeding, but because this technology is designed to feed packs or pouches of a uniform thickness, accommodating a resealing mechanism often means it cannot do the job accurately.

In developing its RF1-V offline pouch coder, Rotech assuaged this issue by using vacuum pick and place technology to pick a pouch from a stack, place it onto a conveyor for printing, and transfer the printed pouch neatly onto another stack for collection. Whilst this represents an ideal solution for operations looking to print up to 40 pouches per minute, some of Rotech’s larger customers wanted to be able to achieve faster speeds.

Drawing on its feeding system expertise, Rotech has engineered the RF1-V+; an offline overprinting system that is capable of coding up to 60 pouches, with a maximum width of 375mm, per minute.

Rotech has achieved this 50% improvement in speed by incorporating a shingling conveyor into the infeed, which in turn enables the hopper that supplies the system with unmarked pouches to be enlarged to hold up to 300 pouches at a time. 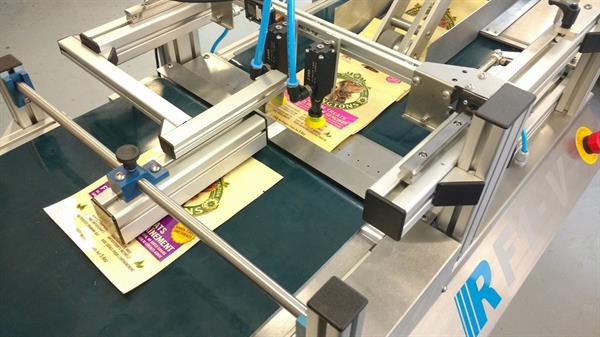 The addition of a shingling step also allows an operator to keep the reservoir of unmarked pouches replenished whilst the machine is running, enabling continuous operation until a batch has been printed.

“The pouches shingle out along the conveyor, which helps loading at the back end as well as picking off the front end,” explains Richard.

It also means that the hopper can be considerably larger than on a stack-to-stack system, on which the speed is limited by the number of pouches that can stacked in the hopper without overflowing. When pouches feature a reclosable zipper, the number of pouches to a stack is reduced. There is no such limitation with the RF1-V+, and the larger capacity hopper translates to faster speeds owing to less downtime for restocking the system.

Once printed, the pouches are neatly stacked for collection by an operator, or, if higher speeds are a requirement, Rotech can fit a second shingling conveyor at the outfeed.

The RF1-V+ can be fitted with a range of printing technologies, though a thermal transfer printer is generally the preferred option in this application, particularly when late customisation is required. This is due to thermal transfer’s ability to print wide formats with a print width of up to 200mm. If a simple ‘use by’ date is all that is required, an inkjet printer may be adequate.

The RF1-V+ will be unveiled at PPMA, where visitors will be able to see the first production-ready system on Rotech’s booth F12.

*Please note* – The RF1-V+ has been replaced with the RF Pouch, which can be found here.